On 15th August the programme of Café Europa Riga – RIXC Innovation Lab will be launched. For one and a half month Café Europa Riga will hold event series at the container module which has come to Riga all the way of more than 2000 km from Belgium. RIXC Centre for New Media Culture invites to attend the large-scale and manifold programme of events focused on art, science and innovative technologies.

When becoming European Capital of Culture, the city undertakes the role and duty of an envoy – bringing up the foreground of it’s own and herald it to reach other cities and countries at the same time. This is the case of Café Europa Riga project – RIXC has undertaken it in a close collaboration between Riga 2014 and Mons 2015. The concept of Café Europa implies networking among the European cities especially. It has to be marked out that Riga is the very first European city outside Belgium where Café Europa is installed, but the next year Café Europa hybrid structures will pop up in many other European cities – such us Linz, Pilsen, Karlsruhe, Sarajevo and others.

The container was brought by two trucks from Belgium to Latvia. Photo: Daina Siliņa / RIXC

Café Europa is a project initiated by Mons 2015 – European Capital of Culture. The main theme of Mons 2015 is “where culture meets technology”, and Café Europa is an example of this. It’s intention is to bring new technologies closer to people, making them more familiar and accessible for everybody.
Doing such, Café Europa is rooted around the historical concept of cafés. During the centuries, a café is the place for meeting, sharing, learning, imagining and creating. Café Europa appropriates these social qualities of traditional café place, but merges them with creative opportunities coming along the new technologies.
Café Europa is multi-functional, architecturally flexible, mobile space, that can be adapted to the needs of the local context while maintaining connection to other places in Europa with similar nature at the same time.

Café Europa Riga will deal with 3D printing and renewable energy technologies especially, it will also invite to rethink the future of urban ecosystems, human evolution and psychology of visual perception together with artists and scientists from Latvia and abroad. 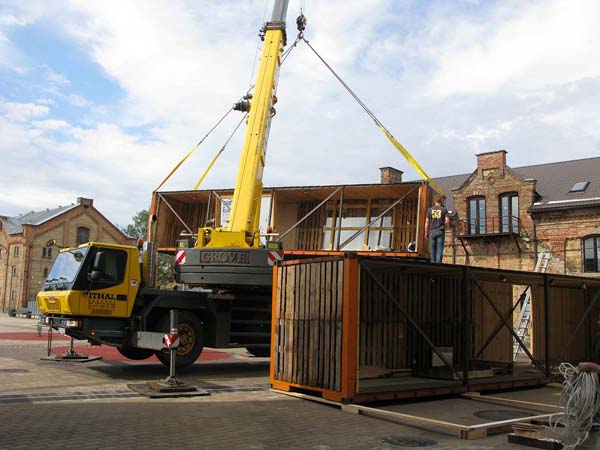 Placing of the container by Belgium and Latvian technicians. Foto: Daina Siliņa / RIXC

September 2–7 (Week III)
Urban Ecosystems – bee keeping and mapping the foraging fields in the city. Exhibition and workshop by Annemie Maes (BE).

All workshops are open for participation, apply in advance, no admission fee, no prior knowledge required.
Special offer supported by ABLV Charitable Foundation: we invite school groups to interactive tours!
Please apply for workshops and group tours: 26546776, rixc@rixc.lv.

Café Europa Riga is the project implemented by RIXC Center for New Media Culture in collaboration with Riga 2014 and Mons 2015.

For the most recent information about the project will be published on Riga 2014 portal and RIXC’s Facebook page.